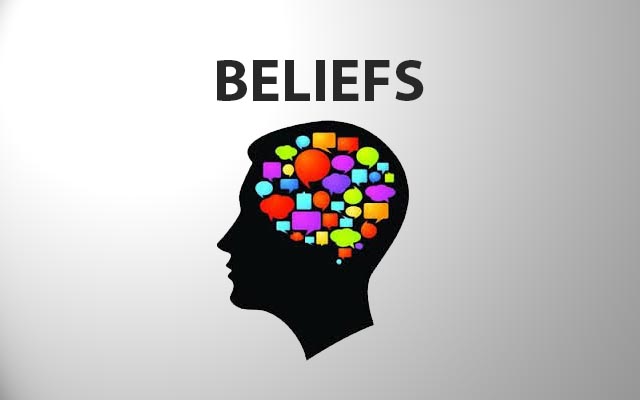 What actually IS a belief?

Simply said; a belief is a thought. It resides/arises in your mind, not anywhere else. The essential difference with practical thoughts like “Let’s not forget to do shopping today”, is that a belief-thought is taken very seriously and always is “personal”, it refers back to “me” and “mine”. “I believe in this or that”…

Any statement like; “I am a republican/democrat” or “I am an American/Asian/European” are examples of such thoughts. Nobody knows exactly what it means to be an “European” or an “Asian”, yet these words are used everyday, as if they are important and meaningful, as if they point to something which is “real”. Something like “Asia” does not exist in reality. It is just a type of labeling that we have applied when we drew a map of the world. We have drawn some imaginary lines on a piece of paper. That’s all.

When belief-thoughts are repeated, often and by many people, those thoughts are taken even more seriously by even more people. This is true for all political, religious and other belief systems. A person who strongly believes in a certain thought, like “I am a proud Republican/Democrat” will often repeat this thought and will want this belief to be confirmed. Actually no one knows exactly what it means to be a proud “this or that”, but by making such statements, we feel that we belong, that we have a position, that we know something!

The consequence however of any position, any belief, is that it excludes or opposes other belief-thoughts. When someone identifies with being “pro-Brexit” and believes that a “Brexit” will solve their problems, information which apparently contradicts their conclusion, is now no longer welcome or interesting. We want our beliefs to be confirmed, not challenged.

The core of this article is not that any particular belief is better or worse than another. That’s not the point. The point is seeing the mechanism underneath.

Unless we begin to see the belief mechanism for what it is (just thoughts) we will take beliefs very seriously and always be ready to fight, hurt and kill others.

We fight, hurt and kill others, just on the basis of assumptions, beliefs, myths. That’s a significant part of human history isn’t it?

So the question that remains then is; are YOU willing to see the illusion of this?